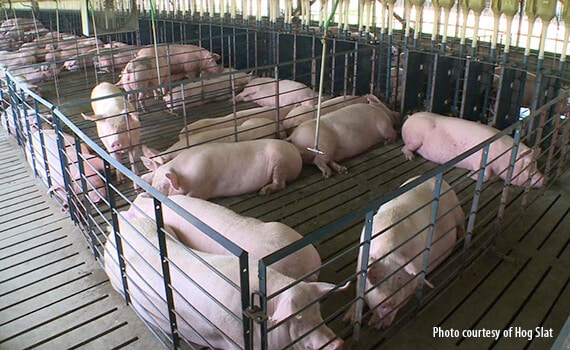 “Most of our clients are converting to pen gestation,” reported Randy Jones, DVM, FSVS, Kinston, North Carolina. “Some of our better performing farms are pen gestation. After all, we managed sows in pens before we put them in crates.”

“Give the sows plenty of space,” stated James Kober, DVM, FSVS, Holland, Michigan. “There are no space regulations in the Michigan law, but there are guidelines available that suggest 18 to 20 square feet per sow. If you get under 18 square feet, sows will start experiencing pregnancy problems.”

If crates are remodeled into pen gestation, utilize the walkway behind the crates for pen space to maximize space per sow. The extra room helps deter fighting.

When sows are first mixed, they fight. Kober suggests mixing sows late in the evening, feeding them and then turning off the lights.

“Some producers will mix sows every week and have a dynamic group,” he added. “The sows will fight some, but if the pens are big enough, they can move away.”

Adequate feed and water are vital for sow productivity, especially in pen situations, according to Jones. Boss sows will “hog” the feeders and waterers if not enough are available.

Jones recommends feeding all sows at once in some type of feed stall. The design and size of the feed stall varies among manufacturers and producers. But the important thing is offering some protection for sows while they eat.

The waterers should be installed on different side panels of the pen to prevent sows from congregating and fighting.

“I always tell clients if you think there’s anything wrong with a sow, pull her out now and treat her right away,” said JoAnna Kane, DVM, FSVS, Holland, Michigan.

“If you think you can come back later to do it, all the sows will be lying down and you won’t be able to find her.”

Sows needing treatment or time to recover from an injury are moved to individual hospital stalls.

Sows bred for gestation crates may experience leg and feet issues when housed in pens. Genetics will need to address those issues. For Sexton who works with many herds already in pen gestation, that has already occurred.

“Genetics have changed to a much hardier animal,” Sexton said. “The animal I started practicing with early in my career would not handle the competitive nature of today’s group-housing environment.”