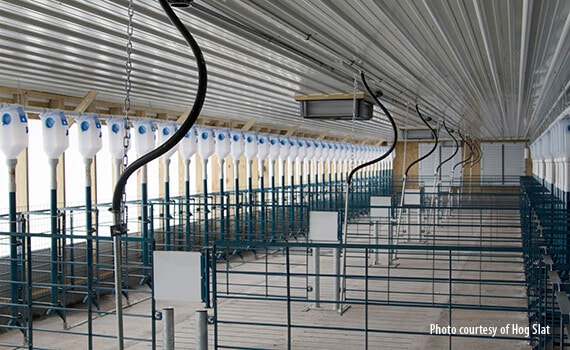 Hog operations in Michigan face an April 1, 2020, deadline for switching from individual stalls to pens for sow gestation. The state legislature passed the mandate requiring group housing for gestating sows in late 2009.

Ohio is the next state to discontinue crated gestation. The state’s hog operations must make the change to pen gestation by 2025.

Some hog producers have already switched to group sow housing without a mandate. Smithfield Foods began the process in 2007 and, in 2018, announced all pregnant sows on company-owned farms are housed in pens. Contract growers are asked to convert to pen gestation by 2023.

Michigan’s mandate allows sows to be in stalls until verified pregnant, according to James Kober, DVM, with Four Star Veterinary Service, Holland, Michigan. This allows producers to individually crate sows during breeding and early pregnancy during implantation.

The law does not include space requirements for the pens. It also doesn’t include a method to check producers for compliance. Instead, if a complaint is lodged about a producer, the state will investigate to determine compliance.

Many of the state’s pork producers have already switched to pens, Kober says. The pens vary from a small number of sows (5-6) to large numbers (300-350). Most of the pens are created in the space where gestation crates were removed, but some new construction also took place.

Feeding methods for sows in pens range from electronic sow feeders to individual feed stalls to feed simply dropped on the floor.

The biggest difficulty with pen gestation is sow aggression. “While there are no space regulations in the law, there are guidelines for square footage for pen gestation from the Extension service,” Kober said.

Some genetics appear to experience more leg and feet issues from fighting than other genetics. Kober expects these problems to be worked out in a couple of generations.