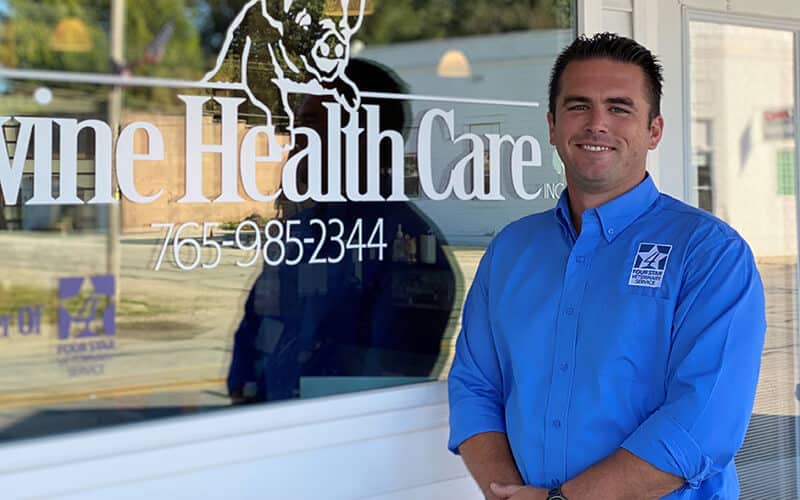 Dr. Gascho has spent his life working towards being a veterinarian. He grew up on a small hobby farm near Rossville, Indiana, filled with a wide variety of animals, ranging from goats and peafowl to dogs and cats. His goal from a young age has been to be a rural or traveling veterinarian, like James Herriot, the famous British veterinarian who wrote several novels about his rural veterinary practice in England.

Throughout school, he was active in sports, clubs, FFA, 4-H, and more. He headed to Purdue University for a bachelor’s degree in 2010 and entered veterinary school in 2013. He worked at the Purdue research farms and spent two summers as a research intern with pharmaceutical companies.  During his clinical practice year of veterinary school, he spent time at Iowa State University’s Swine Medicine Education Center, and externed at several of the Four Star Veterinary Service locations.

In 2017, Dr. Gascho received his Doctorate in Veterinary Medicine from Purdue with a food-animal focus and started work at Swine Health Care, Inc. He focuses primarily on preventative and population medicine, and the economics of protein production.  He spends most of his time in pork production, but also specializes in aquaculture and poultry.

Dr. Gascho, his wife Bethany, and their son Raymond (age: 1) live just outside Delphi, Indiana. He has many hobbies to keep him active, but you’ll usually find him outside playing sports or doing any other activity in nature, such as traveling, hiking, and camping.